Over the last two decades, public school districts in Illinois have seen a growing disparity per pupil between the funding enjoyed by affluent districts, like Arlington Heights, and that of less fortunate ones, like East St. Louis. State Senator Andy Manar, Democrat from the 48th District, has introduced legislation that for the first time in 17 years will attempt to overhaul the method by which education funds are distributed, by simplifying the process and making it more fair. 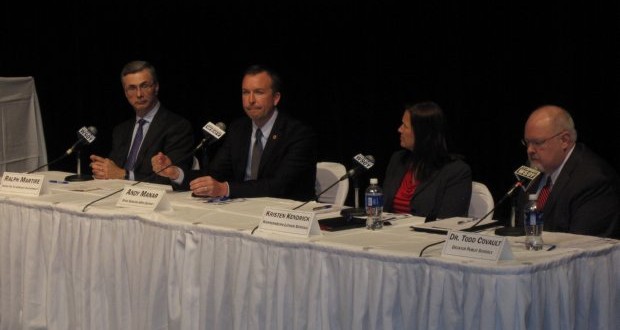 To inform the community about the proposed legislation (Senate Bill 16, or SB16), the Education Coalition of Macon County hosted a public forum Thursday evening in the Decatur Civic Center entitled, “Transforming Our Schools: A Panel on Funding Reform.” The panel consisted of Sen. Manar; Decatur Public Schools Director of Business Affairs Dr. Todd Covault; Warrensburg-Latham School District Superintendent Kristen Kendrick; and Ralph Martire, Executive Director of the Center for Tax and Budget Accountability. The event was moderated by Bill Wheelhouse of WIUS radio station and Brian Byers of local station WSOY, and was sponsored by ADM, WSOY, and the Herald & Review.

Revenue from property taxes is the largest source of education funds in the state budget. The principal cause of inequitable distribution of those funds in recent years has been the fact that skyrocketing property values in affluent areas have yielded increasingly robust revenues from property taxes; meanwhile, less affluent areas have seen property values remain flat or even decline. In the past the State made up much of the shortfall between districts’ actual funding needs and the revenues yielded by those property taxes. Currently a large percentage of this shortfall does not get covered.

Manar’s legislation, SB16, seeks to remedy this situation. Although the bill does not raise any new revenue, it seeks to redistribute existing funds more equitably by making the funding calculation process itself simpler and weighted towards areas with higher need. Dr. Covault, who strongly supports the bill, pointed out that the State currently employs 10 different formulas for calculating the distribution of education funds; the new bill seeks to clarify the process by reducing the calculation to just one formula.  Mrs. Kendrick said that this simplification would result in increased predictability and stability for local districts, since they would know in advance what funding levels to expect. Decatur would stand to see its share of state funds increased by $2.7 million.

During the process of crafting his bill, Manar closely examined best practices and  successful outcomes in other states that have adopted similar rules, such as Massachusetts. In the month since its introduction, he has made several changes and additions based on input from other legislators and educators around the state. The bill is scheduled for a floor vote in the Senate in 23 days. Currently, only Democrats have signed on as co-sponsors of the bill, but according to Manar, “We have to have bi-partisan support for the bill to pass.”