CTBA experts are available to provide insight, analysis, and data to the press on a wide range of public policy issues. In addition, CTBA disseminates new research and timely updates on policy developments to the media.

The prescription to cure what ails Illinois

It's relieving to know that, as a matter of Illinois state constitutional law, words in the English language actually have the meanings identified in the dictionary — which is really what the Illinois Supreme Court ruled when it held that the "pension reform" legislation of 2013 was unconstitutional.

Is Illinois' budget fix a tax on services?

Though Springfield at the moment is tied up in bitter ideological battles, eventually lawmakers are going to have to pass a state budget that almost certainly will require some new revenue. In that vein, a report out today suggests what could be a surprisingly large source: extending the state's sales tax to cover more services, something that has drawn some backing from both legislative Democrats and GOP Gov. Bruce Rauner.

According to the study, extending the state's portion of the sales tax—5 cents on the dollar; the remaining sales tax comes from municipalities and other local governments—to consumer services would pull in a whopping $2.1 billion a year for the state treasury. The fee would hit things such as hair grooming, haircuts, country club and health club memberships, and lawn care.

The Center for Tax and Budget Accountability and the Taxpayers' Federation of Illinois have released a report analyzing Illinois's sales tax rates and base, concluding that expanding the sales tax base to consumer services would increase state tax revenue, modernize the state's tax policy, and improve the stability of the state's fiscal system.

Press Release: Expanding the Base of Illinois’ Sales Tax to Consumer Services Will Both Modernize State Tax Policy and Help Stabilize Revenue

The Center for Tax and Budget Accountability (CTBA) and the Taxpayers’ Federation of Illinois (TFI) jointly released a new report, Expanding the Base of Illinois’ Sales Tax to Consumer Services Will Both Modernize State Tax Policy and Help Stabilize Revenue. This report identifies why expanding the base of the state sales tax to include consumer services—like pet grooming, haircuts, country club membership, health clubs, and lawn care—would simultaneously help to stabilize revenue generation for the state’s fiscal system, while reforming tax policy to comport with the modern economy.

As clock winds down, there's plenty left to do in Springfield

The Legislature is scheduled to be in session for the next 13 days, as it plods toward its traditional May 31 adjournment date (although there's nothing that says it can't stay in Springfield longer).

There has been no open discussion of a particular tax

If you want to know where to find some money for state government, Ralph Martire has some ideas.  The executive director of the Center for Tax and Budget Accountability shared his ideas with members of the Senate Revenue Committee.  What about adding the sales tax to at least some services?

What's Next For Pensions, Now That Court Has Tossed Illinois' Law?

It took legislators years of talking about Illinois' pension problem before they did much about it. There was a 2011 law that affects state employees, university professors, and public school teachers hired after that time. Then in 2013 they passed a law that reduced current workers' and

Ralph Martire of the bi-partisan Center for Tax and Budget Accountability analyzes the data and explains the fundamental issues that are at the root of the fiscal problems in Illinois impacting education. The conclusion? The deficit and the future of education in Illinois have a solution; the data show us what must be done. 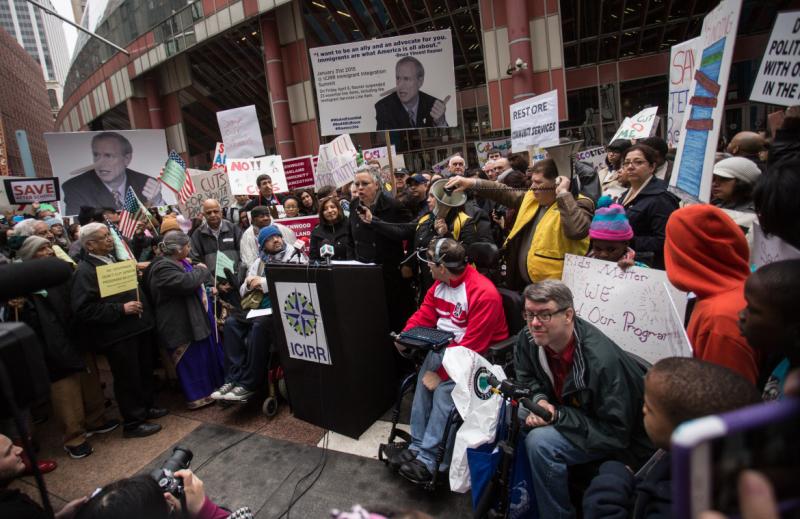 The Illinois Coalition for Immigrant and Refugee Rights rallied against Gov. Bruce Rauner's budget cuts at the

Want to fix the state budget? Here's how, says one expert

Illinois can solve its multibillion-dollar