Transforming our Schools: A Panel on Funding Reform (SB16) 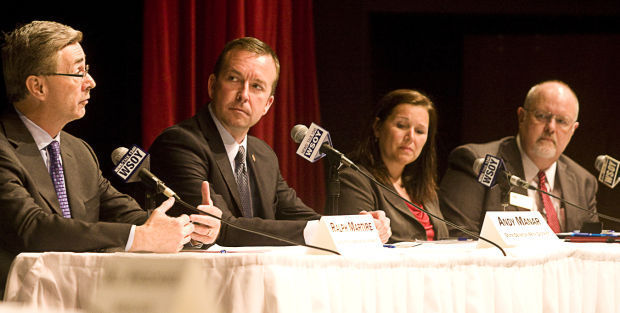 Ralph Martire, executive director of the Center for Tax and Budget Acountability, spoke about Illinois school funding during a forum at the Decatur Civic Center. Pictured from left are Martire, state Sen. Andy Manar, Warrensburg-Latham Superintendent Kristen Kendrick and Todd Covault, director of business affairs for the Decatur School District.

The School Funding Reform Act of 2014 looks to set up a single school-funding formula that places more of a focus on the needs of school districts. Senator Manar sponsored the measure, which was developed from suggestions found in the Senate Education Funding Advisory Committee’s recent report on education funding reform.  Currently, SB 16 is in the Senate, awaiting action.

Community members were encouraged to attend; public questions for panel members were collected by the Education Coalition through various means, including social media, email, and in person. They can join us on the web www.edco4kids.org, Facebook: EdCo4Kids, and Twitter: EdCo4Kids.